This customer has recently purchased a house in Sevenoaks and was looking to extend and reconfigure the interior layout. As part of this, they had removed a wall, effectively extending the hallway which had been tiled in fantastic original Victorian tiles. Naturally, they felt the extended hallway should look the same and wanted the Victorian tiles extending into this new area with matching tiles. 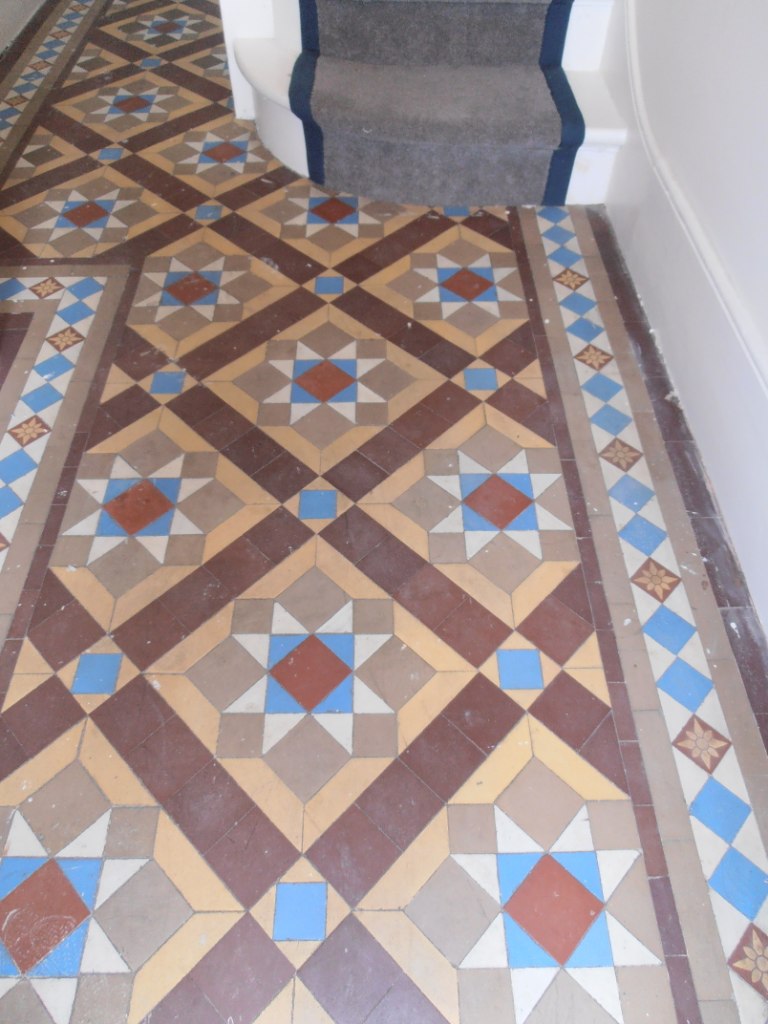 Also, the existing tiles had not been cleaned and sealed for some time and were now overdue a deep clean and fresh seal, this however would to work to our advantage as cleaning the existing floor and then sealing the whole floor in one go would help the new tiles blend in with the original. 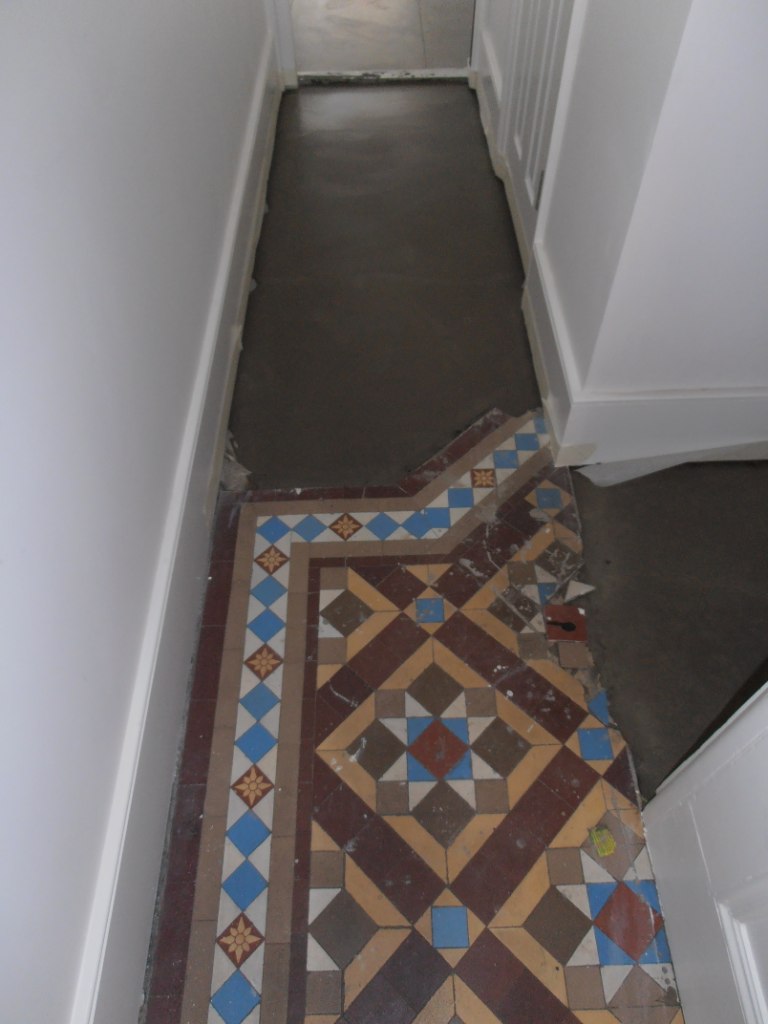 To clean the floor, I applied several different products. When cleaning Victorian tiles, I usually start by applying our heavy duty cleaner known as Tile Doctor Remove and Go because it is particularly effective at breaking down grime that has been built up on these tiles over many years, and as its name suggests strips away any old sealer. This is left to dwell on the tile for ten to fifteen minutes before being scrubbed in with a black scrubbing pad fitted to a rotary floor buffer.

Once the cleaning slurry from the Remove and Go had been vacuumed up and cleared completely from the area, I then applied a strong solution of Tile Doctor Pro Clean, a high alkaline cleaner which helps to get deep into the stone to eliminate ingrained dir and staining.

I finished the deep cleaning process by applying a solution of Tile Doctor Grout Clean Up, which is an acid-based cleaner that is good for removing grout haze and other mineral deposits such as effloresce. After diluting it with water, I used it to rinse the floor, neutralising any efflorescence and limescale. It also assisted in opening the pores in the clay based tiles to get them ready for an impregnating sealer.

The next step was to extended the hallway using reproduction tiles which I had sourced to match the existing Victorian pattern. There were also a couple of areas where the existing tiles need replacing. Rebuilding Victorian tiled floors is quite a common request for Tile Doctor so over the years we have built up a good list of suppliers and often source tiles from ebay that we keep in stock in case someone needs them.

One the new tiles were laid and the grout had gone off I returned to complete the project by sealing the whole floor with a couple of coats of Tile Doctor Colour Grow, a colour-enhancing impregnating sealer that leaves the floor richer in colour while retaining the natural looking matte finish requested by the customer. 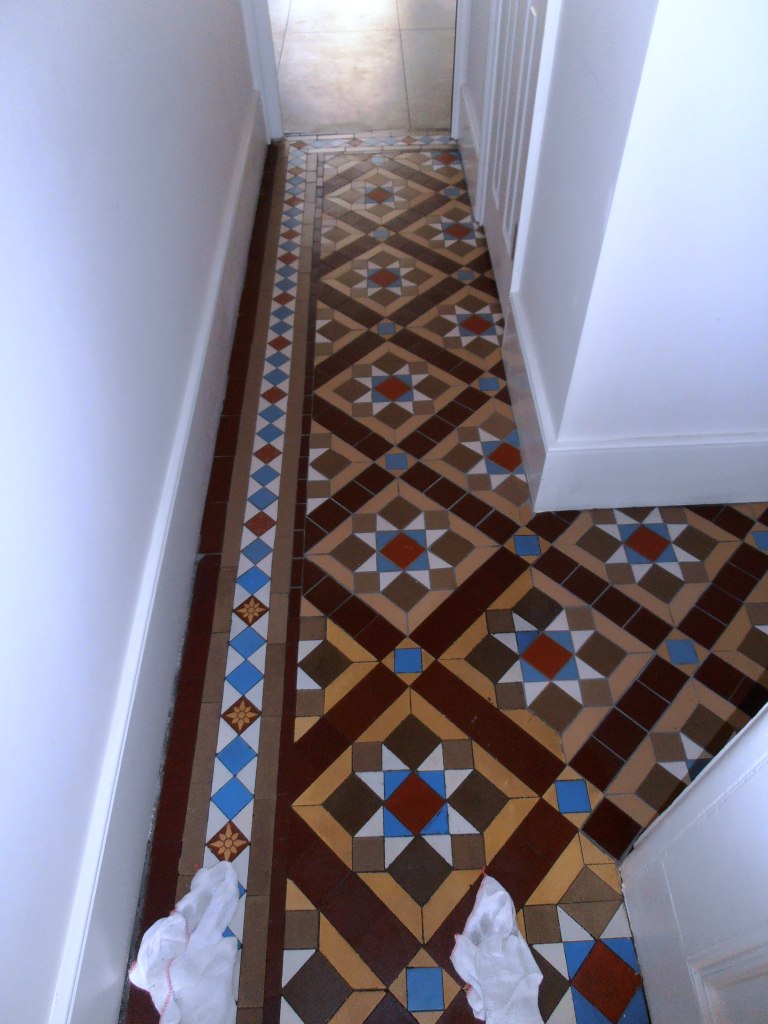 The photos show just how great the results were – the customer was very pleased with their newly extended and refreshed Victorian tiled hallway. 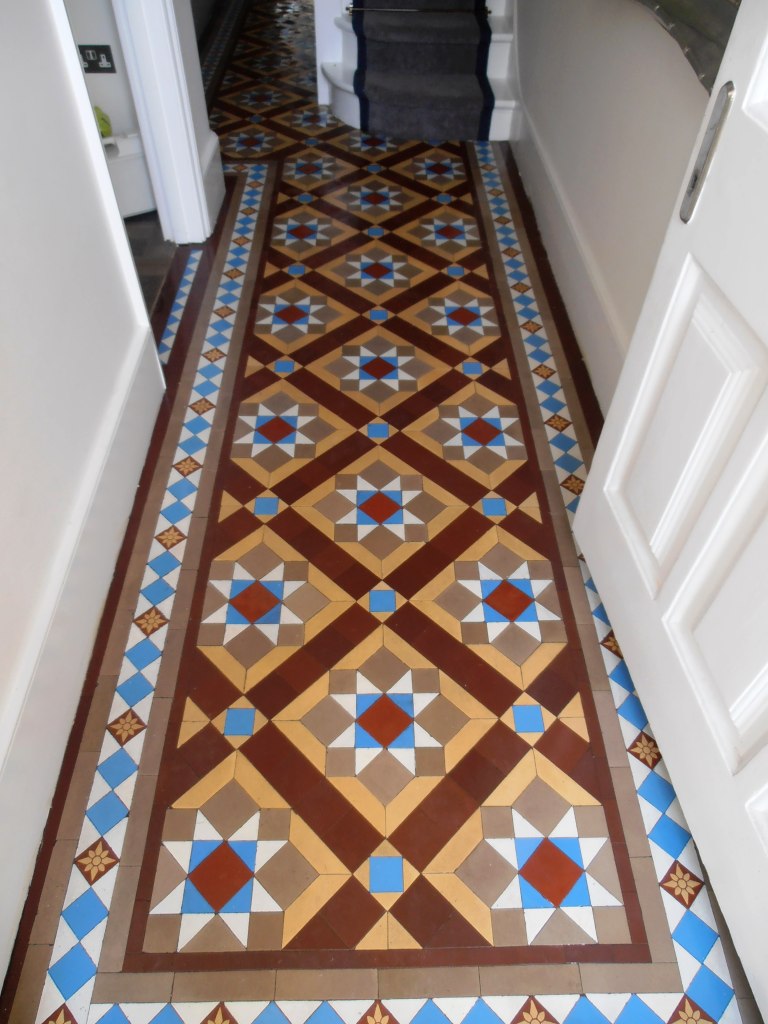 Not too long ago I was called to the large town of Bromley, where my client was in the process of renovating an Edwardian house. The house has a fascinating original geometric Victorian tiled hallway which had previously been covered in carpet which my client now wanted restoring and extending.

Before beginning my work I had an initial consultation with the client and liaised with the builder. It was agreed that the existing floor joints would be strengthened and the current floorboards would be replaced with ply sheets, allowing for the area to be fitted with new Victorian tiles, ensuring that these were consistent with the original design. The first task was to clean the original tiles so that they would blend in with the fresh, new tiles. To do this I mixed a solution of three parts Tile Doctor Pro-Clean (a high alkaline cleaner) to one part clean water, combined with a small quantity of NanoTech HBU. NanoTech HBU is a penetrating cleaner which uses nano-sized particles to reach areas other cleaners simply can’t in order to lift out difficult stains and ingrained dirt.

This solution was washed over the floor, and was left to dwell for five minutes. I then used my rotary machine with a black pad to agitate and work the solution into the dirty tiles. After completing this initial clean I used a wet-vac machine to hoover up the resulting residue.

There was also some glue residue around the edges of the floor from where carpet grippers had been placed years before. To remove this I used Tile Doctor Remove & Go, which breaks down adhesives, waxes and old sealers. I covered the treated area with plastic to prevent it from drying out, before leaving it to sit for a couple of hours. Once the product had begun to break down the glue I then agitated it with a scrubbing pad to remove the residue. The area was then cleaned with the Pro-Clean/NanoTech HBU solution.

Once the old floor was clean I started laying down the new floor using a matching set of tiles I had managed to source. Victorian tile designs are still very popular so many of the original designs can still be found being made today.

Once the tiles had been stuck to the new hardboard I was able to give both floors a general clean with a weak dilution of Tile Doctor Pro-Clean to remove any dirt from tiling etc, this was followed by a rinse and the use of a wet vacuum to get the floor as dry as possible before sealing. 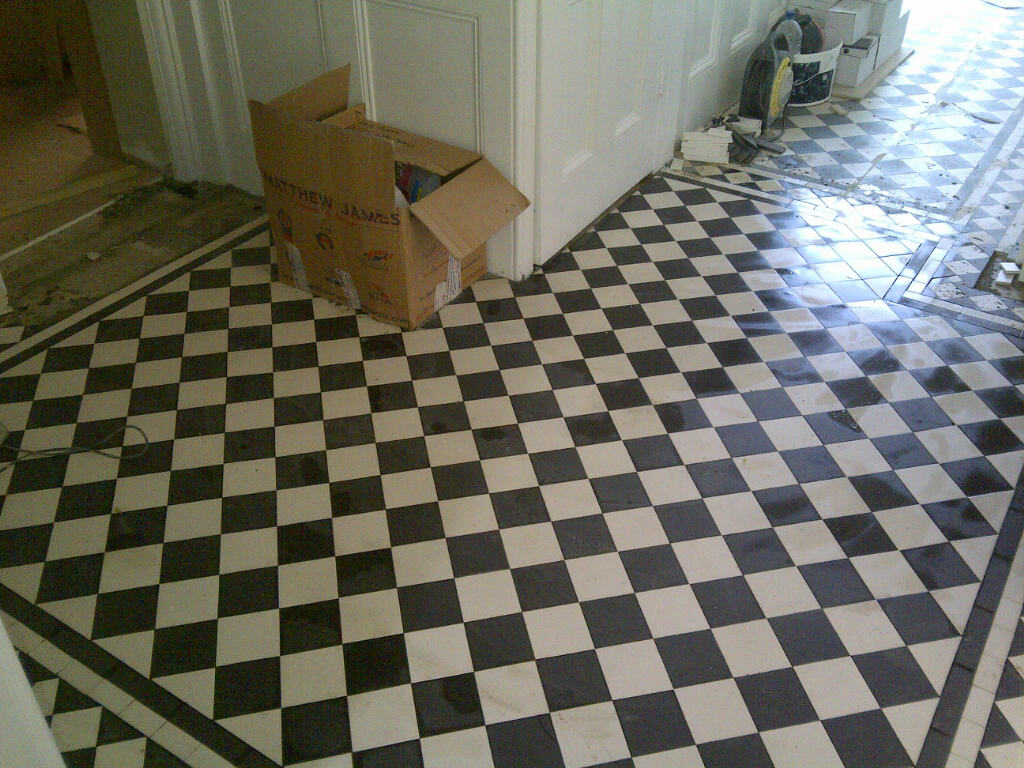 After leaving the house for more than 24 hours to allow the hallway to dry completely, I returned to seal the tiles. After inspecting the area to ensure no excess moisture remained, I applied five coats of Tile Doctor Seal & Go, a water-based topical sealer, to both the old and new tiles.

This gave the entire hallway a nice sheen finish (as you can see from the photographs), as well as a robust surface seal to protect the tiles from dirt and wear in the future. 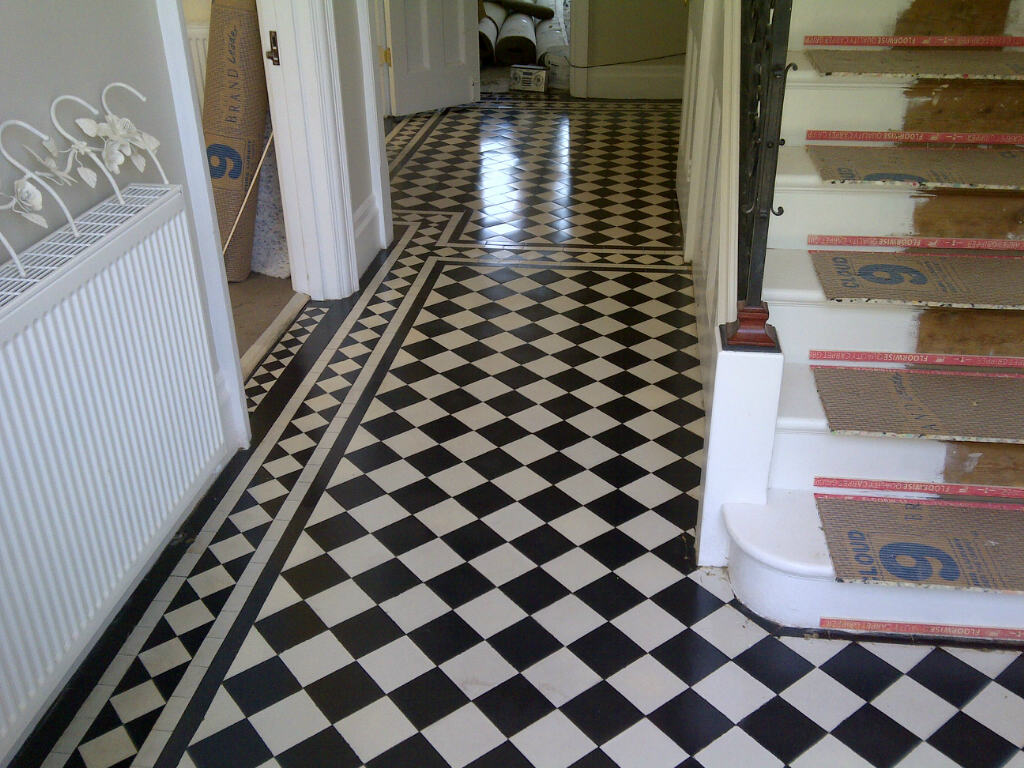 Once the sealing process had been completed, it was near impossible to distinguish between the old and new tiles and as you can imagine the customer was very pleased with the end result. 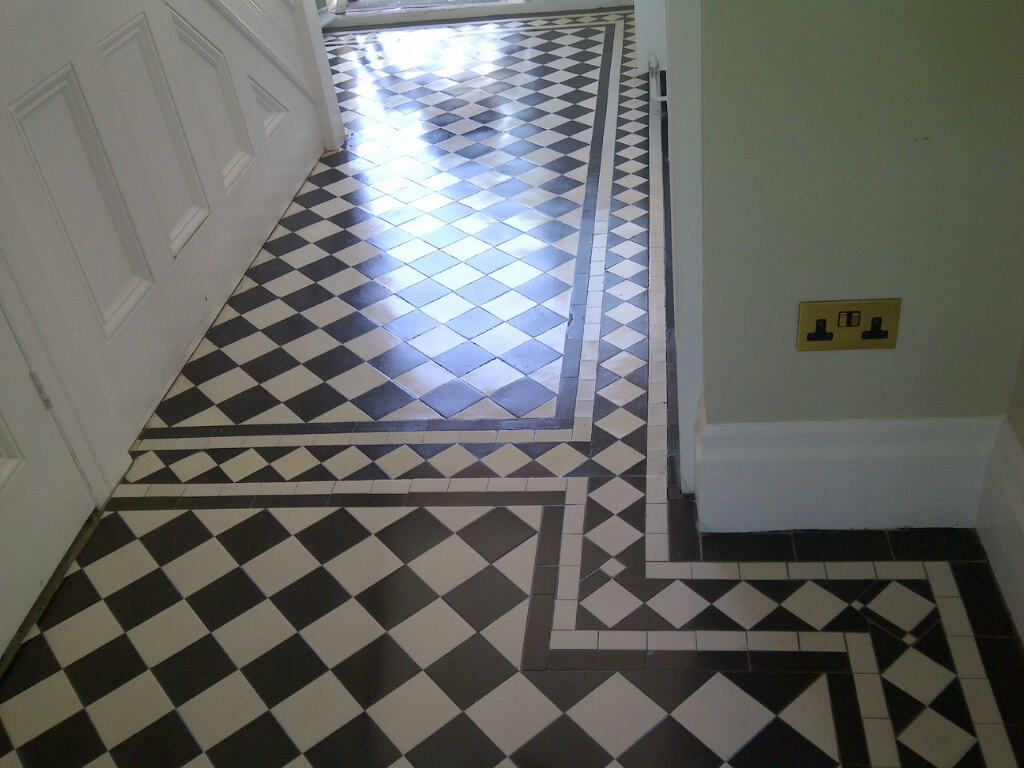 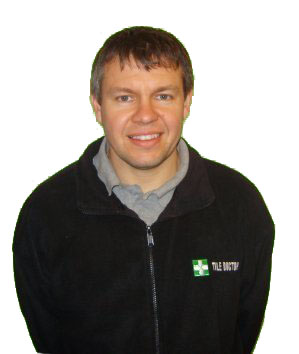 Great work by Jason, our local Tile Doctor. The bathroom’s limestone had seen better days and Jason was able to give wall and floor tiles a new life, and also provided with useful advice for keeping them clean. Would definitely recommend Tile Doctor.
Sophie W, Greenwich

Jason from Kent Tile Doctor cleaned and sealed our encaustic tiles. He did a lovely job and kept us really well informed about the process and follow-up care. He’s a really nice guy and a pleasure to work with.
Emma S, Forest Hill

Jason was very professional, and did a brilliant job. I only wish I had contacted him sooner! He communicated every step and very helpful all round. I would highly recommend him to anyone needing to bring your tiles back to life!
Chloe B, Borough

Jason is a friendly and knowledgeable upon arrival. My marble floor was looking tired and dull, but after several hours working on it Jason returned the marble to its former glory.
Douglas S, Broadstairs

Brilliant. Jason was really friendly, professional and knowledgable. He cleaned, grouted and sealed my shower cubicle. Very pleased with the end result, it looks much fresher. Would definitely recommend Jason.
Suzanne P, Bromley

Jason was very professional. He came and assessed the work needed and explained it all to us. His communication was great from start to finish. He was friendly and polite. The work was great. We are very pleased. My only regret was that we had not called him earlier and before it had got so bad. Jason explained what he did and how to care and maintain our travertine shower and walls from now on. He was tidy and considerate throughout. I would definitely recommend him.
Yvonne C, Tunbridge Wells

We recently found a black and white tiled floor under a carpet with a large concrete bodge job running through it. Jason has repaired the floor bringing it back to its former glory and we couldnt be happier.
Jennifer H, London